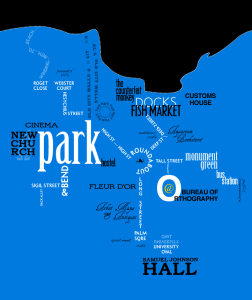 Twice this year I’ve spoken about matching story and mechanics — once for the Oxford/London IF Meetup, and once as a keynote talk at the Malta Global Game Jam. Both times, I mentioned the idea of using mechanics as the basis of world-building. I’ve done this both with the letter-changing powers of Counterfeit Monkey and the Lavori d’Aracne sympathetic magic of Savoir-Faire and Damnatio Memoriae. (I’ll talk a bit about all of those games below, so beware moderate spoilers, if you care.)

In Malta, one of the questions I got after my talk was “how do I know what questions to ask when world-building?” and I suggested having a look at conventional fiction guides for world-building. It seemed like a fair response at a time, but as I’ve had a look at some of the world-building guides out there, I felt that most of them didn’t necessarily translate directly to the types of strategies I use for this cause. So I’ll belatedly go into a little more depth about that now, in the hope it’s useful to someone (whether or not ever seen by the original questioner).

If you’ve got mechanics, that typically means you’ve got

And that’s all we need to ask world-building questions.

If the action explored is something people do in the real world (even in restricted circumstances), then this becomes an occasion for research: a cooking game might occasion research into real-world restaurants, or a driving game might be a good reason to look into real-world car-racing. Or we might ask ourselves, what changes to the real world would make this activity much more prevalent or raise the stakes of the outcome? (See: zombie games with a lot of parkour action.)

If the gameplay action is not tied to anything in the real world, though, we may need to invent a context that makes sense of it.

In Savoir-Faire, magical powers go with aristocratic birth, which means that there are a lot of jealousies and resentments surrounding them — and suspicion attaching to an apparently peasant-born person who displays those abilities. In Counterfeit Monkey, the ability to change objects based on the spelling of their names is facilitated by technology, but also requires a particular linguistic environment — which provides an incentive for the government to be quite rigid about what languages are spoken and how they are spelled.

Those sorts of questions lead us on to questions of economy:

In Counterfeit Monkey, there are at least theoretical ways to apply letter-changing powers to provide significant resources to economically disadvantaged regions, and that goal drives one of the major characters.

Meanwhile, the Lavori d’Aracne allows for body parts to be linked to inanimate objects, if you’re daring/foolish enough to try, with the result that (for instance) the person can feel whatever happens to the inanimate object. And there are also one-to-many links. Obviously all that has kinky applications, which the feelies for Savoir-Faire allude to — this is hardly a dominant topic of the game, but there’s an implication in the surrounding materials that the aristocracy is considered decadent for all the usual reasons but also because they’re mostly likely having a lot of weird magic sex.

And of course, the action of the story can cause demand as well as supply:

And as a spin-off of those:

In the world of Counterfeit Monkey, with the right technology and sufficient power, it’s possible to create abstract objects, not just concrete ones. Initially, that’s just a curiosity of a few puzzles, but it eventually becomes critical to the plot.

If we’ve got economy and politics, we should have history and philosophy, too:

In the world of the Lavori, the aristocratic magic has largely died out by the late 20th century, for reasons that are only partly understood — but a big part of the reason is the revolutions of the late 18th and early 19th century, and the French Revolution in particular. Up to that point, people rationalized the ability as being tied in with their theological beliefs on the will of God and the divine right of certain leaders.

In Counterfeit Monkey, word-based object-changing didn’t become possible at all until language communities reached a critical size — until there were enough speakers in one place.

In Counterfeit Monkey, the player moves through a society where letter-changing abilities are common, but require both technology and energy; the government has placed limits on what technology may be distributed to the general public, but over the course of the story, the player may find her way around more and more of those limits.

If the action is rare in the game:

Meanwhile on the world state front:

All of this is basically scratching the surface — there’s tons more you could do with this. But perhaps you have the idea.

From these kinds of questions, we can get a backstory for the world; conflicts and backstory that might shape the main characters; possible motivations for an antagonist; barriers for level design.

I often find plot elements this way, not just background material, especially by looking at the extreme or unusual ways of using the power in question. For instance, in Counterfeit Monkey, it’s possible to bring abstract concepts into the physical world. Take the M out of LIME and you get an object that represents the concept of a LIE. It’s also possible to make people, in a kind of rudimentary way, though this is discouraged — but take the R out of CARD and you get a CAD, a rakish figure from an old novel. Those facts together mean it’s even possible to make an abstract person — and in the endgame of Counterfeit Monkey, you meet Atlantida, the setting’s equivalent of Marianne.

This is important narratively — the protagonist has been trying to escape this setting, and fighting its government and culture the whole time — and at the same time it’s paying off the mechanical learning the player has been doing throughout the game.

4 thoughts on “Not Exactly Mailbag: Worldbuilding from a Mechanic”