NarraScope is still accepting submissions for speakers, and the January 18 deadline is upon us.  This is a new games conference that will support interactive narrative, adventure games, and interactive fiction by bringing together writers, developers, and players.  They are interested in a wide range of games and platforms; more information can be found on NarraScope’s home site.

They are currently looking for a) panels and individual talks that explore the field in-depth, and would last about 50 minutes with a 5-10 minute Q&A, and b) Lightning Talks that contain 5-10 minutes of specialized information.  The conference is set for June 14-16 in Boston, MA, and interested parties can check out the event’s proposals page here.

January 22 is a meetup of Chatbots and Voice Assistants London, featuring among other things a talk from BBC R&D on ‘Hidden Cities’ – a 90 minute interactive audio piece where users can explore Berlin. This meetup space is an interesting one in general for people into interactive audio, Alexa games, and similar topics (content varies and is sometimes more commercial, so check out who the speakers are for the particular date you’ve got in mind).

Also January 22, I’m on a short panel about the future of PC gaming at Pocket Gamer Connects.

As you may already be aware, a wealth of copyrighted material entered the public domain at the beginning of 2019.  To celebrate this, Randy Lubin and Mike Masnick are hosting the jam “Gaming Like It’s 1923,” and are currently accepting submissions until the end of the month.  Participants may submit digital or analog entries, provided that they draw inspiration from at least one work originally from 1923 (the hosts have helpfully included links to lists for those who could use a quick refresher, as a lot has happened since 1923 and some of us may have forgotten what all came out that year.)

On the more technical side, the newest version of the ink tool integration is out, and available on the asset store.

Previously on this blog I’ve referenced Jimmy Maher and the research he’s done with The Digital Antiquarian.  Last week Maher announced that he will be launching a companion site called The Analog Antiquarian. While The Digital Antiquarian records the history of computer gaming and digital culture, The Analog Antiquarian will focus on worldly wonders, starting with the Pyramids of Giza.  (Also worth pointing out that this all represents a substantial amount of work, so if you like and want to support Maher’s research, he has a Patreon here.) 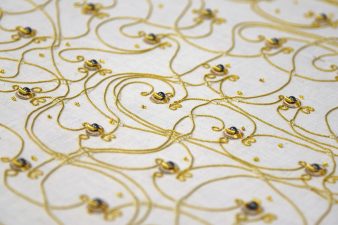 Not directly IF-related per se, but I thought this was cool: Irene Posch’s Embroidered Computer explores “using historic gold embroidery materials and knowledge to craft a programmable 8 bit computer.”  (Posch’s main website also has a number of other projects, including a Knitted Radio.)

At the beginning of this month, the Independent Games Festival revealed its finalists for the 2019 IGF awards (March 20 at GDC).  Andrew Plotkin, who was on the narrative jury, wrote a trio of articles, each sharing his reactions to some of these games: something notable; mixed reactions; and my favorites.  Good reading for those who want to familiarize themselves with the finalists, as well as those curious to see how a jurist approaches the process.

One thought on “Mid-January Link Assortment”