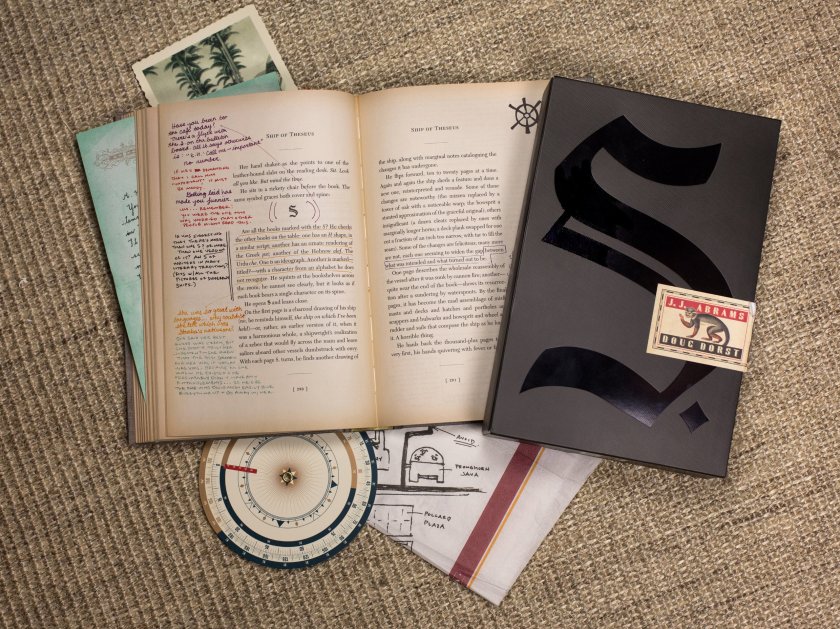 S is a puzzle-novel with feelies, imagined by J. J. Abrams and written by Doug Dorst. The premise is that there’s a novel, The Ship of Theseus, written by the mysterious VM Straka and edited by his devoted editor FX Caldeira. This novel is the object of considerable academic debate and political struggle.

There’s also an ambiguity about the true ending of the book: the Chapter 10 printed here is (fictionally) not the original written by the author, and the “true original” ending has been made available online.

The scholarly debate draws in two students, Eric and Jen, who start leaving one another notes in the margins of the book, and then get entangled in the struggle, and also entangled in one another’s lives. Jen and Eric’s story is organized semi-thematically rather than chronologically with the passing pages: they tend to come back to certain bits of the book to talk about certain subjects. Even the early pages of the book contain notes from late in their relationship. Conveniently, they change pen colors at a couple of key points, which at least tells you what era you’re looking at.

Between the pages, there are a number of other very lovingly made artifacts, including postcards, photographs, letters, and in one case a map hand-drawn on a café napkin. The book is also (for various reasons) full of ciphers and clues, some of which Eric and Jen solve themselves, and some of which have been discussed at great length by internet onlookers. The artifacts are amazing, and the whole book shows tremendous production values.

So it’s a piece that feels like a form of analog interactive fiction, or a classic Dennis Wheatley mystery dossier. Or, also/alternatively, a call-out to literary mystery/romance stories like Possession. I didn’t really find it satisfying either as puzzle or as novel, though, because what it communicates is in fact fairly thin relative to the number of pages and amount of work involved.

S. is a bit challenging from a UX perspective. Several of the online reviews I’ve seen complain that the reader’s first task is to figure out how to read it. Should you stick to the text of The Ship of Theseus on the first reading, and come back for the marginalia afterwards? I felt like that might be the best way, but I couldn’t maintain it. The margins frequently invade the text very extensively, and the main text is not interesting enough to anchor the attention when there are so many distractions tugging at me.

This text starts with an amnesiac protagonist and then sends him on a series of peculiar, dreamlike adventures. These are told in a very cinematic style, heavy on chases and explosions and things seen from the outside. It’s very unclear what is going on, at what level of reality, with what stakes, and why I should care. Nor does the text itself really feel to me like it belongs to the 1940s, though this is a secondary point.

Eventually, via the marginalia, we learn enough about VM Straka to read the protagonist of The Ship of Theseus in a biographical light, and to understand his strange wanderings to represent Straka’s own struggles against a world-wide conspiracy led by sinister arms dealers. There’s a touch of SD-6 here, and a bit of an ARG flavor. The mysterious blue-black weaponry, and the black wine of the final chapter, calls back to the mysterious and dangerous red substance in both the Star Trek reboot and Alias, just with a different hue.

Meanwhile, the academics reading and studying Straka are interested in his text as a set of clues and as a collection of iconography. To them, literary reading is a kind of puzzle-solving exercise. This felt like a request, or suggestion, that viewers apply similar methods to Abrams’ own work, and that we please regard the repetition of a color or an animal as a mark of profundity.

Abrams’ idea of the mystery box is well documented, a desire for hope over certainty and closure, the idea of mystery as better than knowledge.

On the third or fourth try, I did get all the way to the end of S. It concerns the following basic questions:

The way the book poses these questions tends towards the facile, and when it does introduce complexity, it tends not to address that complexity very effectively.

On the topic of identity, Eric and Jen have their own secrets and traumas, and at a certain point one of them admits to having told a pretty significant lie; but the other’s reaction to that lie is only minimally documented. The format of the book precludes us from seeing just the point of interaction where things might become most interesting and most personal.

And on the topic of love. I have read reviews that describe Eric and Jen’s relationship as “touching.” I myself found it unconvincing. It does have good moments — the pair of them picking up shorthand in how they talk to each other, for instance. But for the most part their exchanges feel limited and a little generic, avoiding the level of self-revelation that would drive strong feeling. They have a few minor points of conflict, but for the most part there isn’t that much tension in their exchanges. Higher interpersonal stakes would have made this much more interesting. And when they start to talk about falling for each other, it felt unearned.

There are several other questions that the book implicitly raises but doesn’t really deal with, or else handles in a way I found disappointingly slight. These are:

For Abrams and perhaps for Dorst also, evil is a syndicate of individuals, perhaps with one specific person at the top, who are responsible for all the wrong things in the world: wars, oppression of workers, enslavement, imperialism, wealth inequality, the desecration of the environment, etc., etc., etc.

And — spoilers now, I suppose — when he is brought up against some of the agents of this evil, and has the opportunity to take them out, the protagonist of The Ship of Theseus decides he doesn’t really care to go much further than giving them all indigestion. I’m not keen on mass murder, but in the context of the story, and the things that the protagonist has done previously, this feels like such a feeble attack that it barely counts as resistance at all.

Nothing to see here about the systemic injustices that will take collective work to dismantle; not much either about our personal capacities for wrongdoing. In the few places the book gets close to talking about the genuinely bad actions of a protagonist, it whiffs on doing any interesting followup. There’s a confession, there are a few snarky references to it in a couple of other marginal notes, but that’s it.

Perhaps Abrams’ mystery-box approach to storytelling is only able to deal with the lead-up: maybe Jen and Eric aren’t telling the full truth about themselves? What will the full truth turn out to be?? — and not with the consequences, not with the process of comprehension and reconciliation that comes afterward.

Likewise, the truth about the relationship between FX Caldeira and VM Straka is treated as a mystery long after it has been very clearly telegraphed in the text, and consequently we never get to the much more interesting question of how they chose to live with their particular situation.

In the end, I find S. exasperating because it falls so short of doing the work I think art should be doing against evil. It ascribes serious tragedies, massacres, and injustices to a cartoonishly over-the-top villain; those who combat him do it via decipherment and armchair sleuthing. The puzzle aspect of the whole project feels like a similar trivialization and misdirection.