I collect Tarot decks, and I’ve been meaning for a while to write about why. Even with a fairly standardized set of cards and suits, Tarot decks demonstrate how a procedural system can be focused on particular domains of meaning and types of significance.

The cards may be dealt randomly, but the card names, images, suits, and interpretive booklets create a space in which certain meanings can be expressed and other types of meanings cannot (or can be expressed only in a veiled and oblique way). This is the expressive range of the procedural system.

The Tarot decks I find most interesting are the ones that go beyond minor re-arting/re-skinning and instead significantly rethink or revise the expressive range of the Tarot, inflecting their decks towards particular problems or meanings — often via conceptual blending between the original Tarot elements and the new theme domain. For instance: 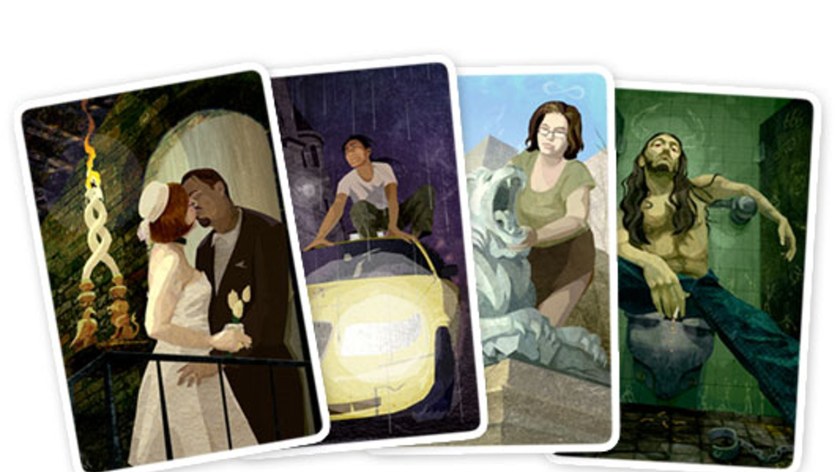 Urban Tarot, Robin Scott. This is my favorite deck, grounded in the iconography of New York City. The images are dense and detailed, providing plenty to think about and read. Most of the cards, not just the arcana, have human figures on them, and many of those that do not are associated with specific landmarks. The Moon is the crescent formed by a displaced manhole cover; the Wheel of Fortune is a ferris wheel from Coney Island, desolate and abandoned. The Tower is — inevitably — the World Trade Center on the morning of September 11.

There’s a lot here about being a human in a society — or withdrawn from a society — and about how we regard justice, celebrity, wealth and poverty. I especially connect with the Aeon from this deck, which shows a woman visiting the memorial at Ellis Island.

At the same time, it’s very personal, with narratives about the card models often forming part of the reading. In this deck you’ll find public defender Verena Powell as Queen of Wands, or the artist’s own grandmother as Queen of Disks. The human reality of these individuals is inspiring — or disquieting, as in the case of the seductive Knight of Cups.

Robin Scott spent many years on this deck, and that shows in the evolution of style from somewhat more stylized and blocky cards like the Fool or the Knight of Souls to the bright realism of Satiety (10 of Cups) or the painterly quality of Art. Arguably that makes the deck less coherent, in some abstract sense, but I like having this evidence of growth and personal change built into the deck.

But I think what I like best about Urban Tarot is the diversity of mood and attitude it contains. Some Tarot decks are predominantly upbeat or predominantly grim; some focus on a small range of human experience or human problems. Urban Tarot encompasses a wider range of human possibility, the dark and the joyful, the healthy and the sick, the personal and the communal.

END_OF_DOCUMENT_TOKEN_TO_BE_REPLACED

In a previous post about narrative structuring, I promised a followup about stories based on card decks — not simply the card metaphor that Failbetter uses in StoryNexus, but actual physical decks, sometimes accompanied by rules.

I’ve covered a few narrative card games here before. Gloom is a popular card game about Gorey-esque horrible events, in which you accumulate misfortunes for your characters until at last they die; each event is named briefly on its card, like “attacked by ducks,” and it’s up to the player to describe how this fits into a larger sequence, if at all. Some players work harder on their narration than others.

Gloom has a number of expansions and spin-offs at this point, including a Cthulhu version and a fairytale recasting. There are also a few features in Gloom designed to encourage continuity, symbols on some event cards that determine whether later events can be played, but in general any chains of causality are invented by the players at game time, rather than baked into the rules or the behavior of the deck. And because Gloom is emulating a type of story in which one bad thing arbitrarily happens after another, there also is not much attempt to guarantee a well-paced story arc.

Once Upon a Time is light in both writing and mechanics: it’s a sort of trope toolkit that the players can use to stick together stories, so that your card might just say “Brave” and leave it up to you how the concept of bravery applied to a character in the story will enhance what is already going on. Or there are Story Cubes, which are dice with trope-y images on them. The line between game and brainstorming device is pretty thin here, though, and I wouldn’t accuse either Once Upon a Time or Story Cubes of actually being or having a story already in any meaningful sense.

Then there’s Dixit, which provides image prompts and it’s up to the player to find some way to describe what is happening in the image. The narrative content is pretty light here, though, and I’ve found that usually we become more engaged with the wordplay of it — what is an interesting, slightly misleading way of characterizing this picture? — than with anything of narrative merit. Perhaps a more successful and storyful version of the Dixit idea exists in Mysterium, which game reviewers Shut Up and Sit Down really liked, but I haven’t had a chance to play that yet. (It was available at Shut Up and Sit Down’s curated board game area at GDC, which was awesome, but I was there at the wrong time to get a try at it.)

Meanwhile, there are also aleatory traditions of literature to consider here: Marc Saporta’s Composition No. 1, a book in a box with unbound pages, to be read in any order; BS Johnson’s The Unfortunates, with chapters the reader may reorder. Nick Montfort and Zuzana Husárová have written about shuffle literature in more depth, including those works and several others.

So it is in light of those various traditions that I’m going to have a deeper look at two particular card narrative games that recently came my way: Jedediah Berry’s The Family Arcana, and the USC Game Innovation Lab’s Chrono Scouts.