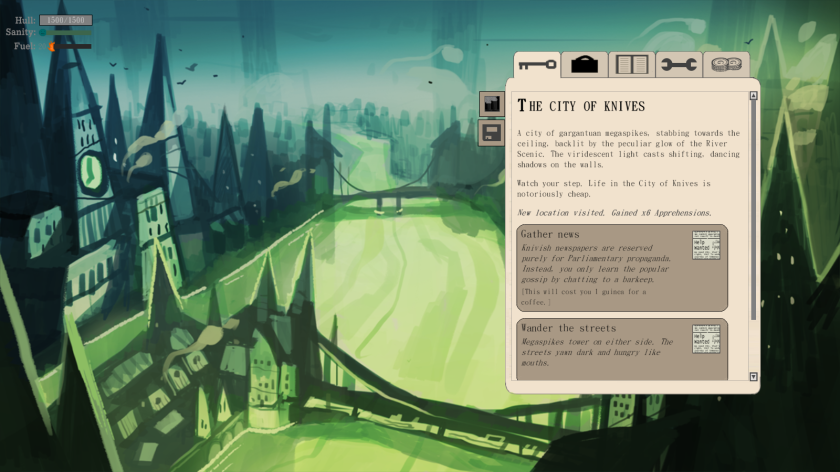 In A House of Many Doors you are an explorer, poet and spy. Mount an expedition to explore a vast dimension of procedurally-generated nightmare architecture. Assemble a dysfunctional crew, build their morale, uncover their secrets, and try desperately to keep them alive. Travel in a train that walks on mechanical legs, and write procedurally-generated poetry about the things you encounter.

The House is a parasite dimension. It steals from other worlds, and can contain almost anything within its endless walls. The player’s journey is a process of constant discovery – there’s always something strange around the next corner.

Harry Tuffs is a member of the Oxford/London IF Meetup, and currently using incubation space at Failbetter Games. He’s just launched a Kickstarter for House of Many Doors, an IF + exploration game. The screenshots are a bit (or, in some places, strongly) reminiscent of Sunless Sea, but this is not a roguelike. I asked him for a bit more detail about the game, and he was kind enough to fill me in.

Me: Procedurally generated poetry! Sweet. In the screenshot I’m seeing a title that looks like it could be procedurally generated. Is your generator doing verses too? Does the player have some influence on what is generated, or is it primarily random, a la Kate Compton’s Tracery?

HT: The player collects memories and experiences through the things they encounter in the course of exploring the IF. For example, they might collect Moments of Melancholy, Reflections on Mortality, Horrifying Ordeals, things like that. If you collect a certain number you can ‘convert’ them into a poem. At the moment I’m only generating the titles, and I doubt I’ll be able to do verses – it’s theoretically possible but it would be very bad. I rather hope a computer will never be able to come up with good poetry! I am going to give it a go, though, just for fun. I’m definitely planning to add generation of the particular poetic structure, the number of stanzas and lines, and key thematic elements (which will tie back to the title). As you write more poems, you keep a little ouevre of the ones you’ve written that you can always refer back to, and the more poems you write the more famed you become in various bohemian circles. Poetry can also have a certain occult power in the House.

Me: You mention that this is Sunless Sea-inspired, featuring exploration and combat, but is not a roguelike. Does this mean no permadeath? Do you envision players needing to restart a number of times to experience the content, or being able to play more or less through from the start?

HT: Yes, there’s no permadeath. There might be some kind of optional permadeath mode, but that’s not what the game is designed for. Players will have to make choices, possibly locking themselves out of other things, but they’ll always be able to reload and they can save the game as many times as they like.

Me: How does “procedurally generated nightmare architecture” play in here?

HT: The architecture is generated differently in every room, although it will stay the same throughout each playthrough. There are currently 1 million rooms being generated, but that’s too many and I’m going to limit the number you can actually explore to about 40,000. At the moment the game mostly just throws down different kinds of rocks as a proof of concept, but my plan is to have a lot of different things – ruins, wells, fountains, stairs, mirrors, bridges, abysses. The further you travel from the game’s starting point, the more likely you are to find odder things that can accurately described as “nightmare architecture” – things that look halfway between building and organism.

Me: So how do the more specific locations with story content (like the city of knives in your screenshot) fit into this?

HT: Story content is all predefined, and the generated architecture is just the space you move through in-between these locations. It’s similar to Sunless [Sea] in that respect, but the map around each location is procedurally generated.

There’s a trailer and a devlog, if you want to know more.

One thought on “A House of Many Doors (PixelTrickery)”