Plenty of interactive erotica exists — and there’s plenty of demand for it, too, as witness the fact that people searching for interactive sex stories form a sizable portion of my daily blog traffic. They’re probably mostly disappointed, but perhaps this entry will console them a little?

But relatively little of what I’ve encountered is as well-written as Ladykiller in a Bind, particularly when it comes to characterization. As Olivia Wood points out, sex scenes avoid being embarrassing by having something to say beyond “here is a peek at the author’s fantasies.” Ladykiller does that. It uses its sex scenes to communicate who the characters are, and shape their relationships with the protagonist; to talk about honesty, fairness, emotional manipulation, self-image, power exchange, and consent. And sometimes the sex conversation feeds back into dialogue about other things:

The story is very much a fantasy, with a cast of super-attractive, wealthy, popular just-barely-18-year-olds. And the framing plot is ridiculous: the protagonist is a girl cross-dressing as her twin brother and hoping that none of his friends, enemies, and exes on the ship will notice. Nonetheless, the sex scenes detail emotional states that are relatively rarely shown in media. I don’t just mean the BDSM aspects here, either. There’s a storyline about a character who is relatively inexperienced and also doubts her own attractiveness, who gradually alters what she wants to consent to as she becomes more confident, and this played out quite plausibly.

That’s not to say the game is, or is trying to be, an encyclopedia of all possible sex formats. There are some places it didn’t go, at least during any of my playthroughs: the BDSM scenes I saw delved deeper into the bondage and submission aspects than into the masochism side, for instance. And, unsurprisingly, the scenarios skew towards issues that arise early in a relationship or for relatively inexperienced partners. At one point the older Maid does comment on the comparative immaturity of all the characters — an acknowledgement that would have felt like a lampshade, except that of course these characters are immature. They haven’t had time to become anything else.

But never mind about sex. Let’s talk about conversation mechanics.

Ladykiller in a Bind may be a visual novel, but it deploys decisions in more fluid way than usual: dialogue options turn up in the top portion of the screen, but you can continue clicking through the bottom of the screen to let everyone else carry the conversation on without you. If you wait long enough, those conversation options start to fade (giving you once last chance to select them), then disappear again. Every once in a while there’s a node that you can’t escape without making an actual decision, but those are comparatively rare: “We have a thing where choices appear as they occur to the player, then disappear as they’re no longer relevant to conversation,” Love explained. “So it turns into a matter of ‘Well, I could say this, but what if something more clever comes to mind? What if I think of the perfect rejoinder?'”

Since options flow out of and into conversation, you run the risk of having The Beast “just sit there like an idiot,” as Love puts it.

Conversation (or other) choices as a snapshot of what’s in the protagonist’s head have a solid history in IF, often supplying extra characterization in games with an author-defined protagonist. Adam Cadre’s Narcolepsy riffs on this far enough to split the screen between external events and interiority. The thoughts indicate what you could choose to do, together with some context on why you might select those options: 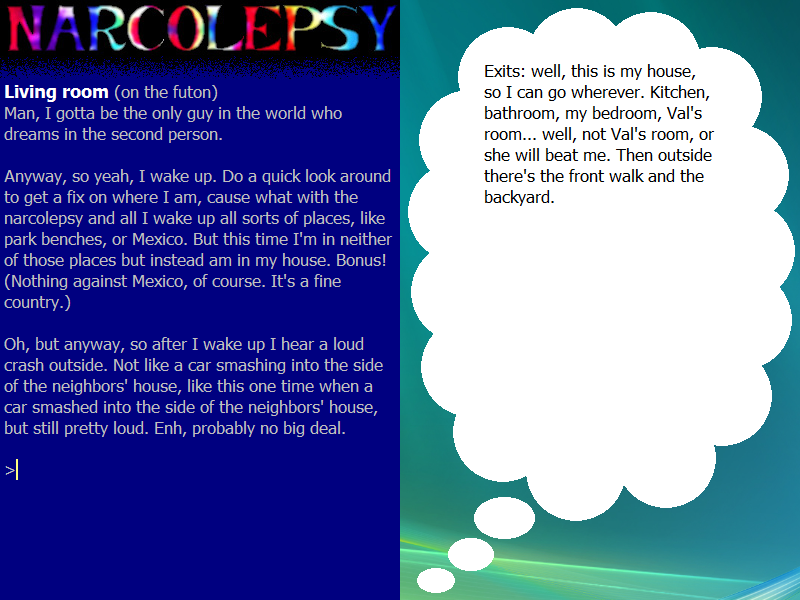 …and I found myself thinking of this experience quite a few times as Ladykiller‘s ideas floated into view.

And make no mistake: Ladykiller in a Bind definitely has a well-defined protagonist. You can push her in certain directions, but she comes into the story with a specific sexual history and particular preferences. There are things that turn her on, which might or might not be the same as what appeals to the player. There are things she considers saying but immediately marks as Mean or Deceitful, and your decision is whether she goes ahead and says them anyway.

Ladykiller‘s mechanics put an extra spin on this, though: everything you think of saying, you have to weigh in terms of how you-the-player are roleplaying the protagonist and also how the protagonist is roleplaying her brother. Can I get away with this? Is it what I would want to say? Is it what my brother would say? If not, is it far enough off-base that people are likely to be able to tell? Suspicious things to say are marked with ! indicators, so the player isn’t operating in the dark: you don’t have to guess what the author’s thinking here, just decide which tradeoffs you’re willing to make. But the mechanic keeps the balance of competing roles constantly visible to the player.

Meanwhile, the possibility of silence gives more agency to the NPCs. This is something we explored in Versu quite a bit — the other characters would keep talking without you unless the author had specially marked a moment as being must-answer — and it does, I think, help dissolve the sense that the protagonist is the only motivating force in the universe.

Mechanically, this also inverts the common confirmation-required structure where the player can pick a dangerous approach and then gets a bunch of chances to bail out. Here, you’ve got loads of opportunities to do nothing, but if you commit to a choice, you have to go where it leads you. That means the player has a lot of time to consider what she wants to say. Even supposedly emotional outbursts often feel calculated. Which is appropriate for the story this is.