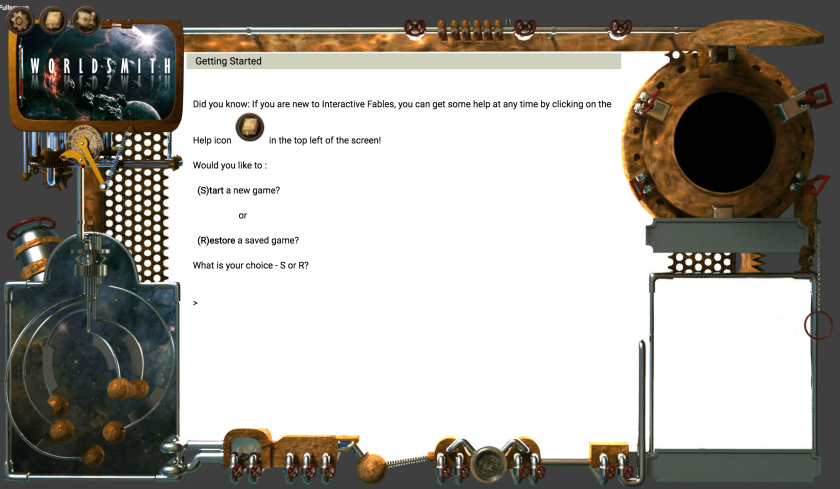 Worldsmith belongs to a category that is still pretty rare, even in this age of growing opportunities for commercial IF: it’s for-sale parser IF. A demo is available for free, but the full version is $5.99. Not only that, but the author has collaborated with furkle (of SPY INTRIGUE fame) to skin an Inform 7 game with images, video, hyperlinks and custom menus. The surrounding images help communicate status information, with images of the NPCs you’re conversing with, and/or the planet you’re currently constructing.

Then there’s the gameplay. Worldsmith is heavy on both simulation and procedural text; I’ve seen a lot of authors start work that made ambitious use of those, but very few actually finish something of that scope and complexity.

The essential premise is that you are a world-builder in competition with several other world-builders (a very high-powered version of the Great British Bake-Off, perhaps). In order to do this, you must combine fundamental elements such as Air and Fire to make planets; set the planets in chosen orbits in your pet solar system; seed those planets with life; and then nurture the life to a degree of sentience that will survive in the wider universe and be able to leave its home planet before said planet becomes uninhabitable.

So far as I’ve seen, this is very much a systems game rather than a puzzle game. There is loads of information to learn about how various elements combine and what sorts of creatures they are likely to produce. Though you get a tutorial (a rather exasperated encounter with your teacher, who evidently feels that you really should have mastered the elements of world-construction by now), there’s a dizzying amount to retain, and you’ll likely find yourself reviewing your instruction manual quite a lot.

I haven’t managed to win. On the contrary, I’ve made a series of half-baked planets and seeded unsuccessful life on them, and needed to restart several times. (It turns out that if you teach your lifeforms too much too quickly, they’ll probably just destroy themselves, so slow up, Prometheus.) But I feel like I’m learning, so this is good restarting, rather than the bad frustrating restarting when a puzzle game has gone unwinnable.

In response to the decisions you make, your world is formed with differently described land forms, creatures, and technologies. It’s probably the closest thing to Spore-in-text-form that I’ve seen.

Still, eventually I realized that if I wanted to blog about this piece, I was going to have to go against my usual preference and write it up without having played the whole thing. So that’s a big caveat. I have some things to point out about Worldsmith but I have not seen anything near all of it, and certainly not most of its storyline.

Because there is a storyline, at least if you pick the Story option at startup. Your fellow contestants try to talk to you, and there are hints of a more global conspiracy. I haven’t finished the storyline either, because I’ve restarted so many times in an attempt to prevent my worlds from being awful. In fact, I found that because the game’s systems were so intricate, I was more exasperated than anything else when an NPC showed up to talk to me. (“Can’t you see I’m in the middle of shaping this world? Take your plot beat and get lost!”)

So after multiple iterations and failures, I switched to the available Game-only mode, where the story was omitted. I might at some point return and do the story once I’m more proficient at the game part. To judge by the review on IFDB, there is in fact quite a lot of story and perhaps a more conventional parser-game-style map that I could unlock at some point if only I managed to get these worlds to work properly.

Impressive though all this is, there are a few things that make the experience less hook-filled and less smooth than I’d like.

Getting started is rather thick going. There’s a lot of technical vocabulary introduced quickly; some of it is clearly functional and some of it ties in to lore about characters and the history of this universe. The following description is characteristic:

>x takwin
The Takwin is suspended above the Altar of Argestes by thick chains. It shines gold in the half light. Three shallow bowls, the Quaich, hold the ingredients of life. Clockwise, the three Quaich of the Takwin hold 5 urna of bile, 4 urna of blood and 6 urna of phlegm respectively. Each Quaich has a tap that allows you to draw off an ingredient into the shallow stone dish of the Altar.

This paragraph is asking us to assimilate quite a lot — the name of the Takwin, the name of the Altar, the name of the bowls, and the fact that the unit of measurement is an urn or urna — but the part of that description that you’re actually going to use (at least for the next 60+ moves of game time) could be boiled down to: “Your ingredients include 5 units of bile, 4 of blood, and 6 of phlegm.” Sure, add a bit of description to set the scene, but invented words are pretty much the opposite of description. I’ve never seen an urna, so I don’t know whether we’re talking about a teaspoon or a gallon; I don’t know whether the Quaiches are shallow and tiny like an ashtray or shallow and huge like a horse trough.

The tome you consult about in-world items is like that too: lots of technical information you need to absorb in order to get moving on world construction, interspersed with lots of references to lore you don’t yet understand. And there are many, many articles to read! Just to get started, you’ll probably need to read up on all three humors, six “eccentrics”, and five “basics”, not to mention the article that tells you what Teachings you can impart to your creatures, and the other article that gives you more background on those Teachings. So even though most articles are glossed with lore-rich footnotes, I soon found myself skimming, trying to get at the information I actually needed to go forward with my world-building, and feeling like a chef with a particularly uncooperative recipe book.

I would rather have had the world-making system introduced gradually through a series of layered challenges and a little more time to digest the information. Moreover, early moves of the game often feature loads of interactive objects, information, and hyperlinks, all competing for attention. If you’re the sort of person who feels overwhelmed when presented with too many options at once, you may also want to go cautiously with this one.

Daringly the game incorporates video with theme music as well — and uses that video as a cut scene that nonetheless tells part of the story in text. Then, too, the imagery isn’t as coherent as I would like, with some elements looking more photographic and some more stylized or cartoonish. The results of the JavaScript integration are technically impressive, but it would take a stronger design to make this look polished.

Nonetheless: this is a wildly ambitious game in multiple respects, and if you follow parser IF, it’s at the very least worth a look to see what it’s accomplished. For the right players, it may also be the delightful fulfillment of a long-held desire. Mix-your-own-recipe mechanics are unusual in finished IF, but more common in aspirations of IF. It’s just that very few people have managed to release such a game.

Disclaimer: I played a copy of this game that I received for free for review purposes.